Skip to content
Book Description:
Panicked at killing a man on a Northamptonshire country road, drunk driver Liam Ross buries the body in the woods. The man was an undercover cop. When Liam returns to the woods… the body has disappeared. 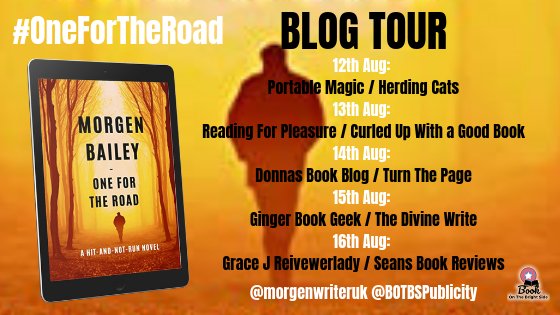 Set in present-day Northamptonshire, England, ‘One for the Road’ focuses on three interweaving threads: the repercussions for drunk driver Liam Ross after he hits a man on a country road when yet another argument with live-in nurse girlfriend, Jo, has driven him to the pub on that fateful night; gang underling Barry ‘Not Gary’ Newman; and newly married Todd Litten aka Neil Ryder, the policeman who was just doing his job.
Extract:

DCI Clive Allen grunted as he put down the phone. He took a sip of coffee, stood up, and looked through his office’s windows into the open-plan section of the second floor. He spotted the man he wanted and beckoned him into his office.

Todd knocked on the door and Clive nodded.

“Undercover. Could be for a few weeks. Can you handle it?”

Todd looked down at his new wedding ring then back at Clive and shook his head. “Yvonne knows how short staffed we are.”

Clive pushed a file across his desk. “Great. Take a seat.”

“We wanted something ordinary.”

“It needed to be something you’d answer to.”

“It’s a small operation, just three men as far as we know but negligible info. on the ringleader. Need more there.”

Todd held up the file.

“Yeah,” Clive replied. “Take it, study it. Get some non-descript clothes. Black, grey, brown. Something so no one will notice.”

Todd shrugged and pointed to his ring finger. “The wife wouldn’t like it.”

“Not all bad guys have tattoos. Real life’s not like the films, you know.”

Clive nodded. “You weren’t my first choice but I know you’ll do a good job.”

Todd hesitated at the half-compliment. “Thanks.” He held the file in one hand and closed the door behind him with the other.